The Reticulated Giraffe is a type of Friend that has made appearances in the original 2015 Kemono Friends mobile game and the anime.

Reticulated Giraffe wears a a plain white shirt with a chest pocket and a brown tie. She also wears a spotted skirt, stockings, and scarf. Her attire is complemented by a pair of white laced boots with brown toe caps. She has long, straight hair with four distinctive colors. She has blonde hair with white bangs with a two-tone brown ponytail. The back of her hair is also spotted. Her eyes are black, and her distinctive animal characteristics can be seen in the giraffe ossicones, pair of white animal ears, the long tufted tail and the spotted design on her outfit and hair.

Reticulated giraffes live in the savannas, woodlands, seasonal floodplains, and rainforests in Africa, and are also known as Somali giraffes. Reticulated giraffes are known to have good eyesight, and can spot predators and other animals approximately a mile away. They also have excellent hearing. They are also known to run at around 35 miles per hour. Each spot on a giraffe's body is unique. 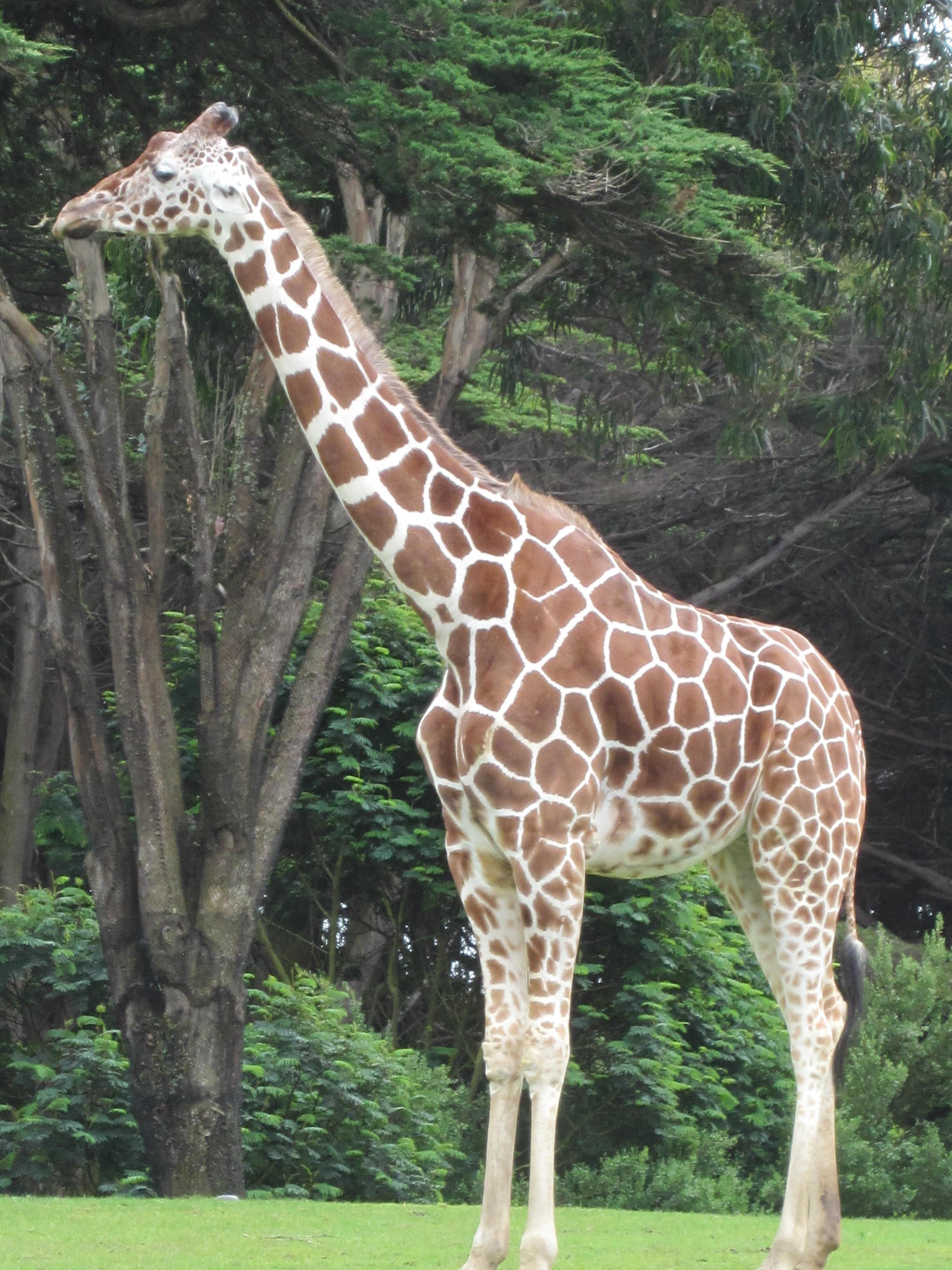 Reticulated giraffes can reach heights of 17-18 feet once they reach adulthood. Despite the fact their necks make up 8 feet of their total height, it only contains a total of seven bones; the exact same amount found in a human neck. Giraffes mainly use their necks for reaching food in high places, but males also use theirs for 'necking', where two combatants swing their necks at one another in order to secure the other's female.

Their extra long necks gives them an edge when finding food. Due to their tall statures, they can reach foliage that other animals cannot get to. This trait makes the reticulated giraffe one of the more successful animals in the African savannah in terms of survival. Their favourite foods include Acacia and Combretum trees, but their full range of diet consists of more than 100 different types of plant. It eats by stripping leaves and flowers from the branches of trees using its lips and tongue, and requires 75 pounds of food each day. They get their daily water intake via the dew on the leaves, although they also make use of watering holes, where they can drink up to 12 gallons of water per trip.

In order to process all this food, giraffes make use of four different stomachs. The first stomach is where food travels to, while the second is where water goes. When the giraffe has finished eating, the food from the first stomach is regurgitated as cud and chewed again, before being sent to the third and fourth stomachs. This way of eating makes the giraffe a ruminant.

Reticulated giraffes may seem like easy prey in their habitat, as they don't sport sharp claws or teeth. However, their kick can kill a predator with a single blow. This makes the giraffe a formidable foe; combined with their fast running speeds and ability to spot danger from a distance, they are not the number one choice for predators to hunt. The only animals that consider hunting giraffes are lions, and only when they're in formidable enough numbers to ensure that at least one of them will survive the encounter.

Unfortunately, the main threat to reticulated giraffes at the moment are humans. The skins of giraffes can be used for rugs, while the hair is thick enough to make good rope. Some villages in Sudan even serve the meat of giraffe as food. Conservation efforts are underway to ensure the giraffes don't become endangered.