The Moose is a type of Friend that appeared in the Kemono Friends anime and the original mobile game.

Moose has long, brown and wavy hair with short fringes. Befitting her species, she has a small tail and a pair of animal ears, with a big portion of light beige hair protruding under them, representing a pair of antlers. She has brown eyes and is depicted with downturned eyebrows. She holds a large lance, with two extremes shaped like typical moose antlers.

Moose's outfit consists of a dark brown vest on top of a long-sleeved gray shirt and a short brown skirt. A black fur scarf formed into a tie decorates her neck, with gray-colored stockings covering her legs. As for her shoes, she wears black loafers. 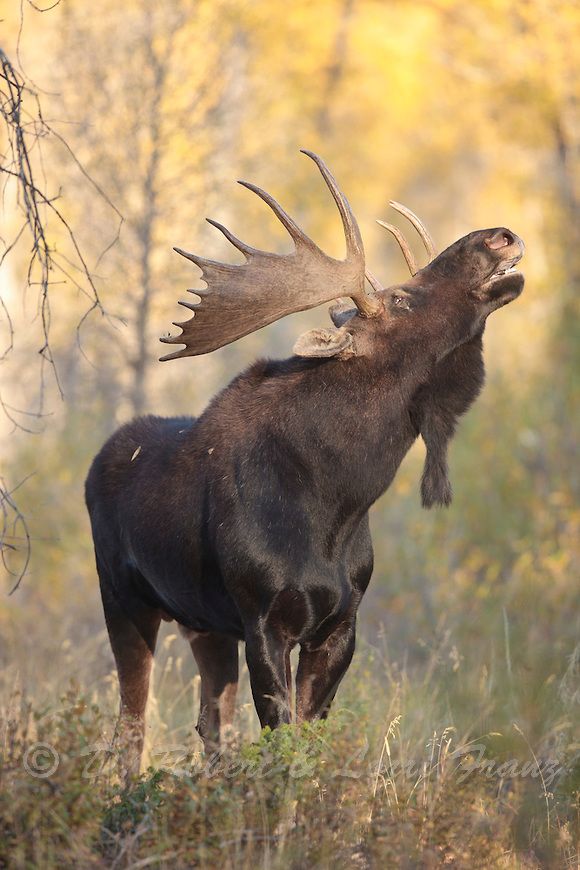 Moose in the wild

Moose are the largest of all the deer species. Standing up to seven feet at the shoulders and weighing up to 1800 pounds, they have very few natural predators. Moose are able to run at speeds of up to 35 miles per hour and are capable of swimming up to 10 miles without stopping. They range in color from light brown to a very dark brown color.

Male moose, known as “bulls,” tend to be darker than female moose, or “cows.” The color variation is especially noticeable in the facial region. Moose have a long flap of skin beneath their throat called a bell. The definite reason for this feature is unknown, but it is thought that it most likely is used to attract a mate. The bell is more prominent in bulls than cows. Moose are very famous for their large antlers. A mature bull may grow antlers that span 6 feet and weigh up to 70 pounds. The bull's antlers take only about 5 months to fully develop, which makes them one of the fastest growing animal organs. In early December, bull moose will shed their antlers, and will immediately start growing new ones.

They are found in a range of woodland habitats, both coniferous and broadleaved, from the tundra and taiga southwards through boreal to temperate zones. This species prefers a mosaic of second-growth boreal forest, openings, swamps, lakes and wetlands. It thrives in secondary growth, and its population expansion in Scandinavia has been linked to the replacement of natural taiga forest by secondary woodland after logging. It is also found in open country in the lowlands and mountains, including farmland, if there is forest nearby. The species avoids hot summer conditions by utilizing dense shade or bodies of water.

Moose are herbivores, and eat many different types of plants, fruit, and bark. However, only eating plants and shrubs does not provide adequate amounts of sodium for the moose, therefore, they eat a lot of aquatic foliage to add sodium in their diet. It is very common to see a moose wading in streams and marshes, with their head in the water, munching on vegetation. Because of their long legs, moose enjoy many high grasses and shrubs, and are able to wade through deep water when feeding.

Feeding habits of moose will change with the seasons. In the spring, they tend to be attracted to meadows and fields where nourishment is plentiful. In the summer, moose can be found more in marshes and lakes, filling up on aquatic vegetation. During winter, moose will forage near the edge of forests eating bark and twigs as other vegetation will have dried up.

Moose are solitary animals, but during mating season moose will herd into groups for the purposes of finding mates. Cows will attract bulls with loud moans, while bulls will compete with each other by antler fighting. Breeding season for moose extends from September through October, and in late May or early June cows give birth. Moose will usually give birth to one calf, but it is not uncommon that twins will be born if food is plentiful. The calf is reddish-brown in color and weighs around 25 pounds at birth. They are capable of gaining over two pounds a day while they are nursing. The calves are weaned at five months, but their mother will rear them for up to a year. During this period the cow will defend her calf from any potential threats. Oftentimes, a cow will have to drive off her offspring after a year in order to care for a newborn calf. A bull does not become sexually mature until the age of five, while the cow is ready to breed by the age of 1 ½ years.