European Hare is a type of Friend that appeared in the original Kemono Friends mobile game.

She has very long tri-colored ears. Her hair is long and brown. She has a short tail. She wears a white blouse with a brown collar and a pink tie. Her skirt is dark brown with pink highlights. She also wears a brown pantyhose with brown shoes.

The European hare, also known as the brown hare, is one of the largest of the lagomorphs. Its head and body length can range from 60 to 75 cm with a tail length of 7.2 to 11 cm. The body mass is typically between 3 and 5 kg. The hare's elongated ears range from 9.4 to 11.0 cm from the notch to tip. It also has long hind feet that have a length of between 14 and 16 cm. The fur colour is grizzled yellow-brown on the back; rufous on the shoulders, legs, neck and throat; white on the underside and black on the tail and ear tips. The fur on the back is typically longer and more curled than on the rest of the body. They are fast-running terrestrial mammal; it has eyes set high on the sides of its head, long ears and a flexible neck. 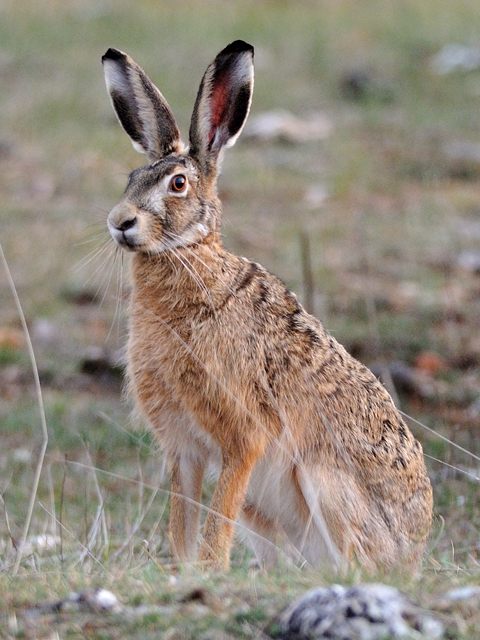 Native to Europe and parts of Asia; their range extends from northern Spain to southern Scandinavia, eastern Europe, and northern parts of Western and Central Asia. They have been extending their range into Siberia; prefer open fields and pastures bordered by hedgerows and woodlots, often around agriculture fields and crops.

European hares are primarily nocturnal, and spend a third of their time foraging, and are generally solitary mammals, however, their behaviour changes in springtime. Many are seen in broad daylight chasing one another in meadows. During daytime, a hare hides in a depression in the ground called a "form" where it is partially hidden. Hares can run at 70 km/h and when confronted by predators they rely on outrunning them in the open. They are generally thought of as asocial but can be seen in both large and small groups. They do not appear to be territorial. They communicate with each other by a variety of visual signals. To show interest they raise their ears, while lowering the ears warns others to keep away. When challenging a conspecific, a hare thumps its front feet; the hind feet are used to warn others of a predator. A hare squeals when hurt or scared and a female makes "guttural" calls to attract her young.

Primarily herbivorous, they may forage for wild grasses and weeds but with the intensification of agriculture, they have taken to feeding on crops when preferred foods are not available. They forage in groups. Group feeding is beneficial as individuals can spend more time feeding knowing that other hares are being vigilant. Nevertheless, the distribution of food affects these benefits. When food is well-spaced, all hares are able to access it. When food is clumped together, only dominant hares can access it.