“Because I'm not as colorful like Crested Ibis-chan and Scarlet Ibis-chan, I'm rather bland am I... ...? I understand that. But there's time when I'm being praised that black and white are nice. I wonder if my name is Panda Ibis my bird life would change? But I like this name. I feel like it has this calm feeling that match with my personality”
—Black-Headed Ibis' introduction

Black-Headed Ibis is a type of Friend that first appeared in a collaborative event with the Niigata Anime and Manga Festival.

Black-Headed Ibis' hair is black in color. As an allusion to the bird's long beak, a lengthy bang stretches down from one side of her face all the way to her waist. At the back of her head, she sports a pair of pigtails. A set of small white wings protrudes from the top of her head, their color matching the feathers of her tail. Her eyes are colored dark brown.

The black-headed ibis is a species of bird that can be found in regions of southern Asia, including India, Bangladesh, Vietnam and southern China. It primarily resides in areas such as wetlands, marshes, rivers and lakes. Black-headed ibises typically feed in groups, both alongside coastlines and inland. Through probing and pecking, they take prey such as worms, fish and frogs. 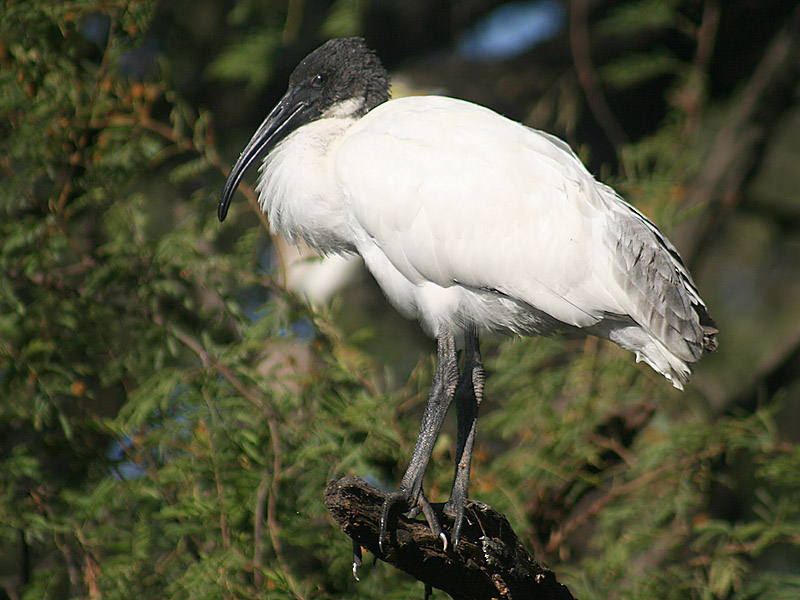 A black-headed ibis spotted at Bharatpur, Rajasthan, India.
The plumage of a black-headed ibis is primarily white, with orange marks on the undersides of its wings. Its head, neck and legs are featherless, exposing its black-colored skin. The ibis' eyes and long downcurved bill are likewise black.

This species tends to nest in colonies, after the monsoon's rainy season. Males court females through display flights and sparring. After mating, paired ibises usually build stick nests on trees nearby water, although they also nest on partially submerged shrubs. The male gathers sticks, whereas the female constructs the nest itself. She then lays 2-4 eggs, which are incubated over the next 23-25 days.

While there are few, if any, cases of predation on adults, young ibises often fall victim to house and jungle crows. Factors such as human disturbance, pollution, hunting and agricultural conversion have additionally contributed to a suspected decline of the overall ibis population. The species is, however, increasing in certain regions.