The Aurochs is an extinct animal Friend that appeared in the Kemono Friends anime and the original mobile game.

Aurochs has short, greenish-brown hair that becomes lighter at the middle. The horns are depicted by protrusions of hair that are a whitish, dull brown color. Her ears, which resemble those of an Aurochs, are located behind her horns. Her skin is tanned, and she has hollow eyes, representing her extinct status. She wears a militaristic uniform that has green and brown camo patterns, with the shirt tied by an orange tie. Underneath, there is also a long-sleeved black undershirt. Her shirt is small and exposes the majority of her stomach. She wears a pantyhose and wears greenish-brown boots with orange tips. Her tail resembles her species, the aurochs. Like other horned Friends, she has a lightly curved spear-like weapon with ends that resemble horns. 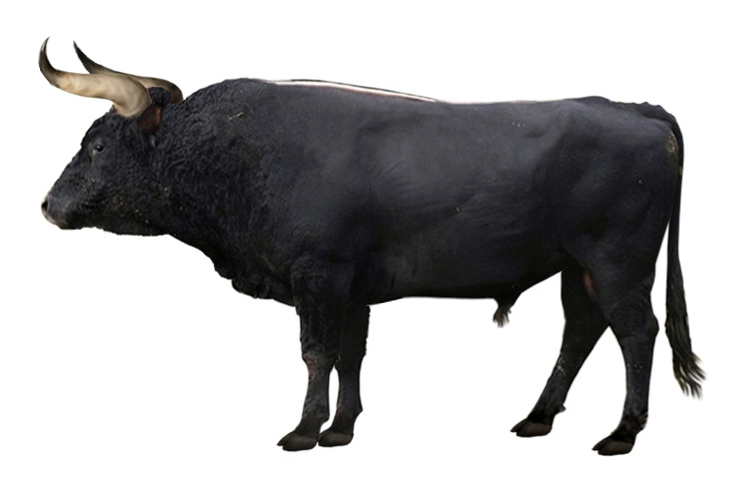 CGI reconstruction
The ancestor of modern cattle,the Aurochs was the largest animal in Europe, towering up to 1.80 meters (6 feet) and weighing around 1,000 kilograms (2200 lbs). Males possessed a dark brown or black color while females retained the brown color acquired at birth.. Both females and males shared big horns growing outward and forward, with the bulls' horns generally being larger. Their habitat once ranged from Great Britain and North Africa in the west to India and Korea in the east.

A grazer, the Aurochs had a big ecological influence as a grasslands maintainer. Establishing a hierarchy in their herds and during mating season in late summer led to the bulls fighting each other severely, often leading to many deaths. Despite their size, bulls were swift and fast. Usually docile, they would become very aggressive and dangerous when provoked. Those qualities made them popular combatants in Roman arenas.

The domestication of Aurochs began long ago, eventually becoming the various breeds of modern cattle. Few predators dared to hunt the aurochs; only the big cats of Asia and Africa as well as bears would attack a healthy adult. Through modernization of the grasslands and hunting, humans pushed the Aurochs out of their natural habitats. By 500 BC, they had disappeared from Greece, after losing habitats in Asia and Africa. In 1200 AD the remaining populations lived in north-eastern Europe, from East Prussia to Lithuania. Poland attempted to preserve the Aurochs in the 1500s, but failed, with the last remaining aurochs, a female, dying of natural causes in 1627.