African Golden Wolf is a Canid Friend that appeared in the original Kemono Friends mobile game.

African Golden Wolf has long, messy sand-brown hair that reaches at least below the shoulder blades. On her bangs she has a range of patterns, such as white on the sides, and golden strands in the center ending in a brown accent. The middle of her bangs reaches the midpoint between her eyes. As part of her clothing, she wears a sweater vest, which is the same color as her hair. Inside her sweater, she wears a white button-up shirt, a white fur skirt, and around her neck a white fur collar accompanied by a pink bow tie. She has long gloves and leggings that are light orange on the front and white on the back, almost similar to the animal's fur she is based on. On her feet, she wears scrunched white socks and golden sneakers. She bears the tail and ears of an African Golden Wolf. 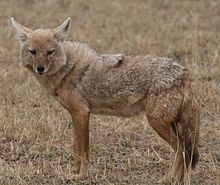 They live in the dry savannas of Africa, as well as in pine wood and oak forests, rocky areas and desert margins. They are omnivorous, as they feed on small mammals such as hares, rodents, lizards and birds, and in a variety of fruits. African Golden Wolves usually create a home den, where a breeding pair and consequent offspring live, and are usually very protective of their territory. The population of this newly identified species is unknown, but they are not really abundant due to habitat loss and lack of prey in their range.