For footwear, Springbok wears a pair of white ballerina flats with a black front end. Her tail is thin, medium in size, and is a deep peach color at the base, descending to a dark brown at the end. Emerging from under her skirt is a patch of long white dorsal hairs. In her right hand, she holds a long pink and white striped staff with a fuzzy pink end from which a set of springbok horns emerges. Springbok is depicted performing a pronking jump.

In her original design, Springbok has long, waist-length, light brown hair which is white colored on the underside. Her bangs include two adjacent crescent bunches of white hair and a light brown middle bunch that slopes down to a point. Atop her head, she has two white antelope ears with brown tips and a pair of curved horns. She has gray-blue eyes.

Springbok sports a pair of light brown penny loafers. Her tail is thin, short, and is black at the end. She also holds a blue handled staff with a ribbed, black horn at each end.

The Springbok (Antidorcas marsupialis) is a species of antelope native to southwestern Africa, occupying much of Namibia, Botswana, South Africa and southwestern Angola.[1]

There are three recognized subspecies, the Angolan Springbok (A. m. angolensis), Kalahari Springbok (A. m. hofmeyri), and the Southern Springbok (A. m. marsupialis). The springbok was first described by German zoologist E. A. W. von Zimmermann in 1780, who gave the species it's scientific name.[2] The marsupialis portion of the name refers to a dorsal skin fold from which long white hairs protrude when a Springbok preforms its signature pronking jump. Of the three subspecies, A. m. angolensis is found in northwestern Namibia and southwestern Angola, A. m. hofmeyri is the largest in size and is found in most of Namibia, Botswana and northern South Africa, and A. m. marsupialis is the smallest in size and is found in most of southern South Africa.[3] Both male and female Springbok have dark, inward pointing horns with many ribs, but female horns are more slender and small in size.[4]

The Springbok inhabits arid regions of southwestern Africa and is commonly found in open grasslands. Springbok generally avoid movement restricting areas such as mountains and forests.[5] Springbok browse and graze seasonally, consuming grasses such as succulent grass in the warmer rainy season and shrubs in the dry season. They drink water opportunistically but can survive off of the water in the vegetation they consume if it contains at least 10 percent water content.[4]

Springbok are most active in the early morning and early evening hours of the day. Feeding most often occurs during these times. On hot days Springbok may forage at night and on cool days they may also forage during the middle of the day.[5] At the end of the rainy season, when the Springbok are faring the best, they will enter their annual rut.[4] During the rut, males will attempt to herd females that enter their territory and will clash with neighboring males as well as males that invade their territory.[5] Fights will consist of “front-pressing, lateral twisting, and levering”. 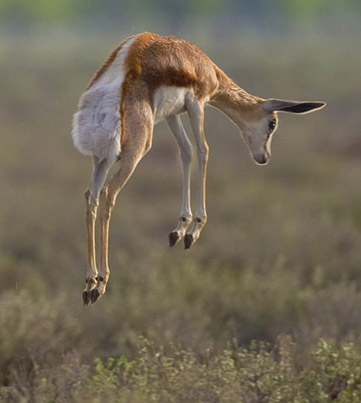