Difference between revisions of "Pavilion:Beginner's Guide"

Titlescreen of Pavilion after a fresh install.

After you have installed the game, boot up the application. You will soon be taken to Pavilion's title screen, which will have three buttons upon installation. The top-left button clears the game's cache, the top-right is used for transferring your game file to another device, and the central button (with the Type 3 Lucky Beast inside it) takes you into the game. Tap the central button to proceed.

You will then be presented with the game's Terms of Service. Select the white checkbox at the bottom of the text and then hit the pink button below to proceed. The game will then download its opening movie, which you can watch or skip. A translation of the movie sequence can be found here.

The player is prompted to enter their name in this box.

Upon watching the opening movie (or skipping it, returning to the title screen and hitting the central button again) you will be taken to the Savanna Area, which is the first Area made available to players of Pavilion. Type-3 Lucky Beast will greet you and introduce itself, and then prompt you to enter your name. Tap the text entry field in the box which appears to input your name (max character limit of 10 characters). Your player name can be changed at any time once you have exited the tutorial sequence.

Tap through the Lucky Beast's dialogue until it will advance no further, and then tap the button in the bottom-left corner of the screen, which has a Japari Bun on it. This will take you to the Japari Bun menu. Within this menu, tap the blue button next to the regular Japari buns (also blue, on the top half of the menu) that reads "補充". Hitting this button will restock the regular supply of Japari Buns. The player has an unlimited supply, so this action can be completed freely, without incurring any cost at all. The only limitation is that you must wait two minutes before the option to restock becomes available again. 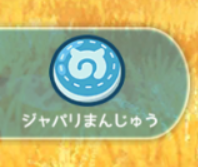 The Japari Bun button. You are instructed to tap this during the tutorial sequence.

Advance through the Lucky Beast's remaining dialogue, and shortly after you will encounter your first Friend, who will invariably be Serval. Tap her, and the game will promptly record her data in the Friends Archive. You will also receive twenty Pikapika as a one-time reward for her discovery, as well as three Pavilicoins and single unit of materials. Tap the screen to advance, and then advance through the subsequent dialogue.

The game will then present you with a series of images. Typesets of these images are coming soon, but for now the images and their corresponding translations can be viewed below. We highly recommend that you read these over as they explain most of the core gameplay mechanics of Pavilion.

Advance through the text and view all of the images until the Lucky Beast stops talking. At this point, you will have full control over the game and can do as you please. Congratulations, the tutorial is over!

The first thing that you should do is select the プレゼント🎁 (Present) button on the main menu, which is the bottom of the three buttons in the top-right corner. Collect whatever bonuses are there waiting for you, which may include Pikapika and exclusive Playthings. With this, you now have options on how to start your Pavilion adventure. What you do now will depend on your playstyle.

Kemono Friends Pavilion is a passive game. It is designed to run in the background of your regular activities and can be checked periodically as new Friends appear and leave. As such, it will not take you long to learn the "gameplay" itself. Your Pikapika, which you will receive from your starting Presents, can be used on two things:

You are also freely able to save your Pikapika, for whatever purposes you wish. Usage of Pikapika will be revisited further on.

You will start with three Playthings: the Mouse Toy, the Golden Mouse Toy, and the Wooden Chair, all of which can be placed immediately with the 5 slots you are given. Up to 10 can be unlocked by getting a certain amount of encounters (this applies to every area). [WIP]