Nilgai is a type of Friend that appeared in the original Kemono Friends mobile game.

Nilgai has purple eyes, shoulder length purple gray hair that fades to a darker color towards the bottom, with two strings of hair projecting upwards that represents horns, and an amethyst ribbon on the back of her head. As expected of her species, she has small animal ears and an animal tail that follows the same color pattern as the rest of her hair. She wields an amethyst lance with horns on either end.

Her upper body clothing consists of a violet tucked in frilled shirt with frilled short sleeves, and a white bow tie with a black gradient at the tip of the laces. She also wears long black-gray gradient gloves, with a black and white wristband. She wears a heather high waisted suspender skirt with a small amethyst belt, dark gray leggings that fades to black towards the bottom, and ballerina flats with white collar socks. 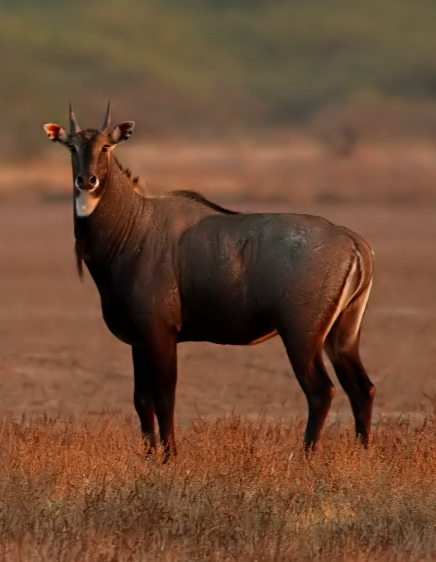 Nilgai is a species of antelope that is widely distributed in India, and can also be found in Nepal and Pakistan. This species has also been introduced to the United States and Mexico. Being amongst the largest Asian antelopes, the Nilgai antelope stands at about 130 - 150 cm at the shoulder and has a body length of 180 - 200 cm, with small legs supporting their stocky bodies. The thin hair is generally blue-gray in males, while being pale brown in females, both of them presenting a mane on the neck, and a tuft of long hair on the throat. Only males have short, smooth curved horns.

Nilgais inhabit relatively dry areas with small cover of forest or scrub, avoiding densely wooded areas. Being herbivores, they graze and browse feeding on the leaves and fruit of several trees, with grass being the main source of their diet. Nilgais are diurnal and are usually found in herds of about 10 individuals, not keeping a fixed territory but defending the space around the group.