“I don't have many chance to go far away so I'm kinda yearning for the outside world? I wonder how it is outside... ... I want to see it. Right! How about if we go together? Can I come with you? That's fine right? Hey!?”
—Island Fox's introduction

Island Fox is a type of Friend that premiered in the third official Kemono Friends guidebook. She has since debuted as a Virtual YouTuber.

Island Fox has orange eyes and multicoloured hair - grey in the front with both darker and lighter markings, with white side bangs, orange and black ears, orange in the back, and grey twintails. Her twintails are tied with two black ribbons. She wears an off-white neckerchief with two V-shaped lines, one orange and the other grey. Her double-breasted coat is a light red colour, with furry white cuffs. She wears a black undershirt and white gloves. Her skirt is grey, with primarily orange tights that have grey at the top and fade to white at the bottom. Her shoes are white. Her animal tail is grey, with an orange underside and a black tip. 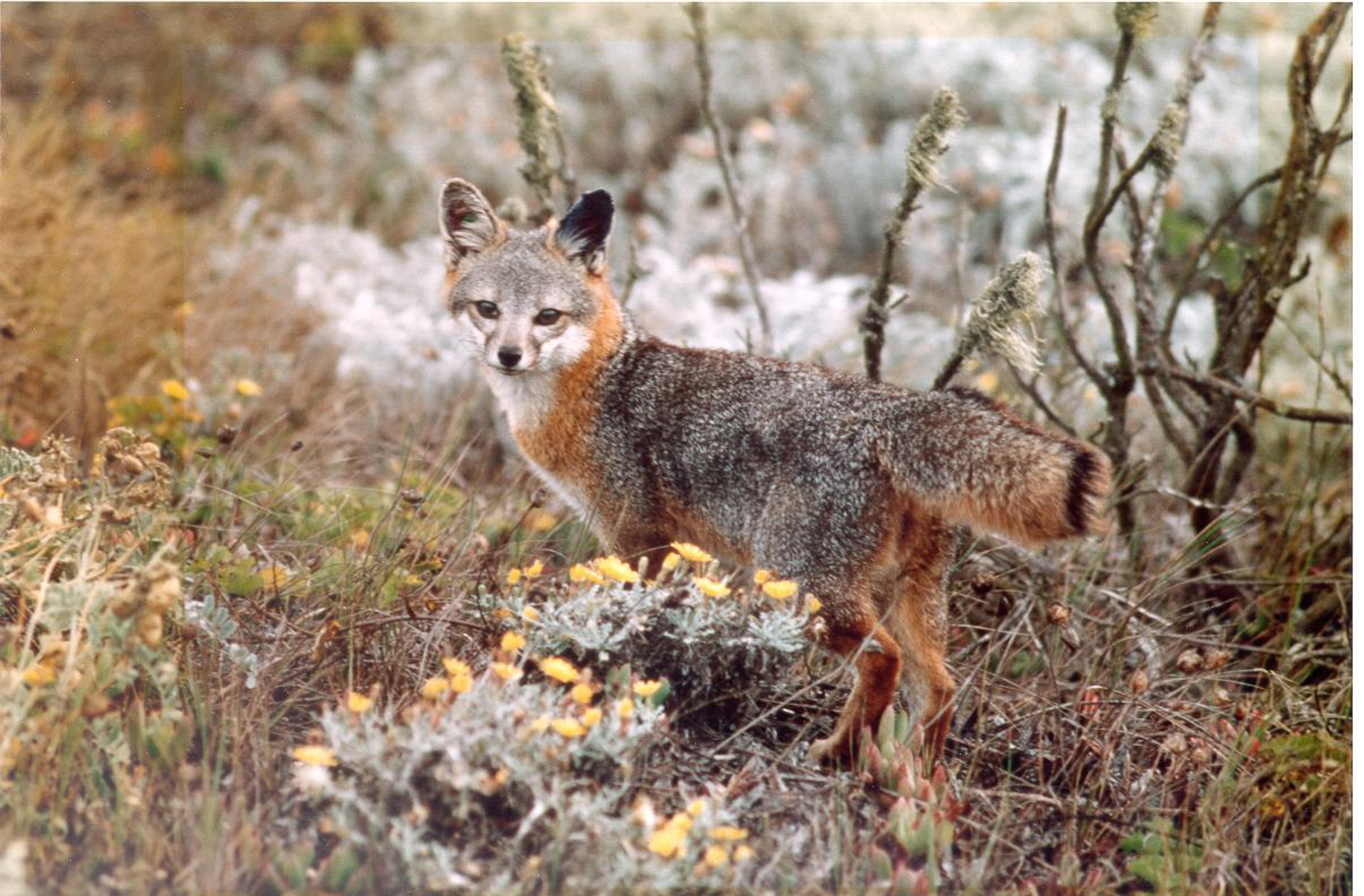 An Island fox surrounded by brush.

The island fox's small size is a result of insular dwarfism, a form of allopatric speciation. It is the largest of the Channel Islands' native mammals, but one of the smallest canid species in the world. Typically, the head-and-body length is 48 to 50 cm, shoulder height 12 to 15 cm, and the tail is 11 to 29 cm long. The island fox weighs between 1 and 2.8 kg; the male is always larger than the female.

The island fox has gray fur on its head, a ruddy red coloring on its sides, white fur on its belly, throat and the lower half of its face, and a black stripe on the dorsal surface of its tail.

Because the island fox is geographically isolated, it has no immunity to parasites and diseases.

Its preferred habitat is complex layer vegetation with a high density of woody, perennially fruiting shrubs. The fox lives in all of the island biomes including temperate forest, temperate grassland and chaparral, with no island supporting more than 1,000 foxes.

The island fox eats fruits, insects, birds, eggs, crabs, lizards, and small mammals, including deer mice. The fox tends to move around by itself, rather than in packs.

It is generally nocturnal, albeit with peaks of activity at dawn and dusk. Activity also fluctuates with the season; it is more active during the day in summer than it is in winter.

The island fox communicates using auditory, olfactory and visual signals. A dominant fox uses vocalizations, staring, and ear flattening to cause another fox to submit. Signs of dominance and submission are visual, such as facial expression and body posture.

The island fox is not intimidated by humans, although at first may show aggression. It is quite easy to tame and is generally docile.