Difference between revisions of "Alpine Marmot"

Alpine Marmot is a type of Friend. Her design was released alongside the redesign for Long-Tailed Chinchilla in the January 2020 issue of Shonen Ace.

Alpine Marmot has black eyes. She has shoulder-long grey hair with creamy tips at the bangs and the sides, a pair of small marmot ears on top. She is in Japanese school uniform: white shirt with a red ribbon underneath a creamy sweater, a red plaid short skirt, grey-fading-into-cream kneehigh socks and grey shoes with red ribbons. She wears long, black gloves and has a long black tail. 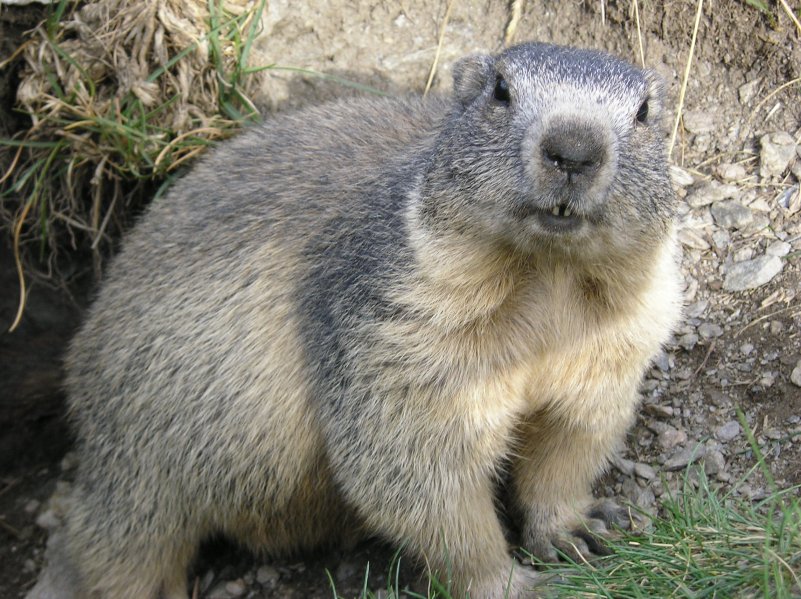 The Alpine Marmot is the third largest rodent native to central and southern Europe. As the name suggests, they live in alpine and sub-alpine meadows. They're around 20 centimeters tall at the shoulders and up to 50 centimeters long. They weigh between three to eight kilograms. Their diet consists mostly of leaves, flowers but also grain, worms and insects.

Alpine Marmots are excellent diggers and dig burrows to live in. They live in family consisting of the parents and their 10-20 offspring. They're very territorial, especially females. The offspring is very playful. One of the group will always be on guard-duty and warn others of dangers with a high-pitched scream, very similar to Prairie Dogs, which belong to the same family, the squirrels. In winter, the whole family hibernates in the large central chamber of the burrow, the den.

Alpine Marmots are monogamous and usually breed in late spring. The one to seven pups are born after just five weeks of pregnancy. The pups first leave the burrow at 40 days old. Most of the offspring will leave as they reach sexual maturity at around two to three years old. The Alpine Marmots populations are currently stable and not in any danger of extinction. They're preyed on by foxes, eagles and occasionally hunted by humans.

Her release correlates with 2020 being the year of the rat, as she is a rodent.